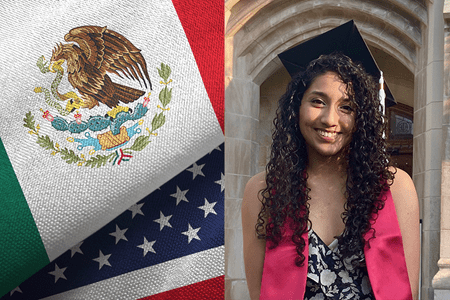 Each year, National Hispanic Heritage Month is observed from September 15 to October 15, to pay tribute to the generations of Hispanic Americans who have positively influenced and enriched the United States through achievements and contributions to society. This blog series celebrates the diverse and enriching heritages of Hispanic students, faculty and staff at Indiana University School of Medicine.

There are moments when Alicia Martinez-Garcia looks at her life as a second-year medical student at IU School of Medicine and marvels. While some of her peers may be “legacy” medical students—coming from a line of physicians—Martinez’s journey represents a different kind of legacy.

“My dad always said, in another life, if things would’ve been different, he would’ve gone into medicine and been a doctor,” said Martinez. “As a woman in medicine, I can carry what my parents would’ve wanted for themselves if they had been given the opportunity.” 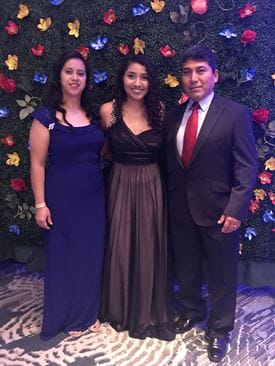 Her parents immigrated from Mexico in their early 20s—around the same age Martinez is now. Her father was the oldest son in a poor family, so work took priority over education. Her mother didn’t complete high school. At times, both worked in jobs they didn’t love to provide for the family.

Maria Luisa Garcia-Sanchez and Santos Martinez-Saldivar wanted better for their four children, so they moved from Indianapolis into the highly rated Hamilton Southeastern school district in Fishers, Indiana. That’s where Martinez was exposed to advanced science, technology, engineering and math (STEM) and biological sciences courses through the Project Lead the Way program.

Now Martinez is on her way to becoming a doctor. During summer 2022, as part of AmeriCorps at IU School of Medicine, Martinez had the opportunity give back, mentoring high school girls from minoritized populations through the STEM-focused Eureka! program at Girls Inc.

“It’s about trying to strengthen that pipeline into STEM and empowering women,” Martinez said. 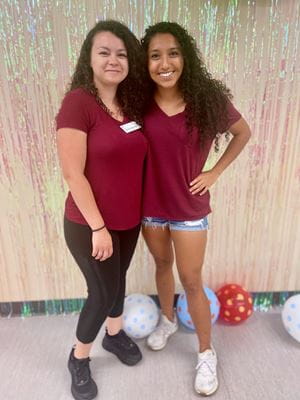 Hispanic and Black populations are historically underrepresented in medicine and science, so it’s important for the younger generation to see role models like Martinez. She and IU School of Medicine classmate Jordyn Vowels-Duce talked to the high school girls about becoming leaders in medicine or other STEM fields and led discussions about healthy relationships. At the end of the summer, they presented a poster at the IU School of Medicine IMPRESS Research Symposium showing the impact of STEM-based programs on girls and women.

Martinez also recently spoke as part of a panel for the First-Generation Student Committee at IU School of Medicine, where she advised first-year medical students to embrace learning about cultures different than their own.

“Alicia is outgoing, bubbly, brilliant and warm,” said her mentor, Niki Messmore, program director for medical student community and civic engagement. “She is passionate about health care disparities and learning about other cultures.”

Martinez has developed confidence out of necessity.

Learning to speak English proved difficult for her mother, so Martinez and her older sister often had to translate—at school, at the doctor’s office, over the phone with service providers and dozens of other scenarios, including applying for Medicaid.

“I remember calling the phone company when I was 10 years old and my mom is telling me I have to be harsh with them to get the charge reduced,” Martinez recalled. “It was a scary thing for me, but it helped with my confidence in being comfortable talking with adults and being taken seriously.” 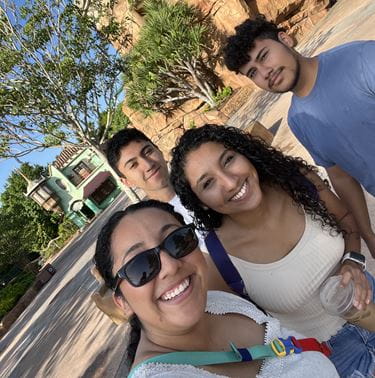 She and her siblings often preferred speaking English, but her parents and other relatives would insist they speak Spanish at home. While it annoyed her then, Martinez is now grateful for her bilingual skills.

“Now I really value my language because it helps me interact with my community, especially when I see Spanish-speaking patients,” Martinez said.

“My mom was always thankful if someone spoke Spanish. I want to be that person who can bring relief like that,” Martinez said. “I always love an opportunity to help someone with that language barrier to feel more comfortable.”

Recently, after struggling through communication with an elderly patient from Columbia during her clinic visit, the woman expressed her gratitude by giving Martinez and another bilingual medical student heartfelt hugs.

“When patients show gratitude like that, it reinforces we are helping—we are making an impact,” Martinez said.

She’s now considering going into emergency medicine because that field provides the opportunity to work with people from diverse populations.

‘My family always believed in me.’ 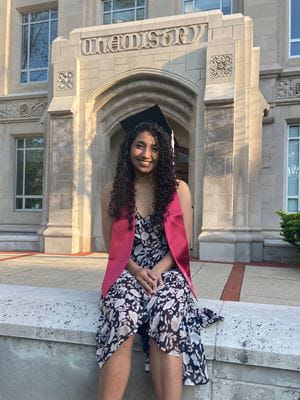 The road to medical school hasn’t been easy. Although Martinez has always been a determined student with plenty of family support, her parents weren’t able to help her navigate through the educational system.

She describes her family culture as having a “tough it out and push through” mindset, so asking for help was initially difficult. However, she quickly realized she needed guidance and sought it from peers, teachers and mentors, becoming a regular visitor to her academic advisors’ offices throughout high school and her college experience at Indiana University, where she earned a degree in biochemistry.

The advice she gives to first-generation students and medical students from minoritized populations is, “Don’t be afraid to ask for help.”

“Everyone is struggling—you’re not alone,” she said. “Impostor syndrome is very real, but remember you are here for a reason. The school believed in you, so it’s important for you to believe in yourself.”

Throughout her journey, Martinez has received the constant support of her family.

“Even when I didn’t believe in myself, my family always, always believed in me,” she said. 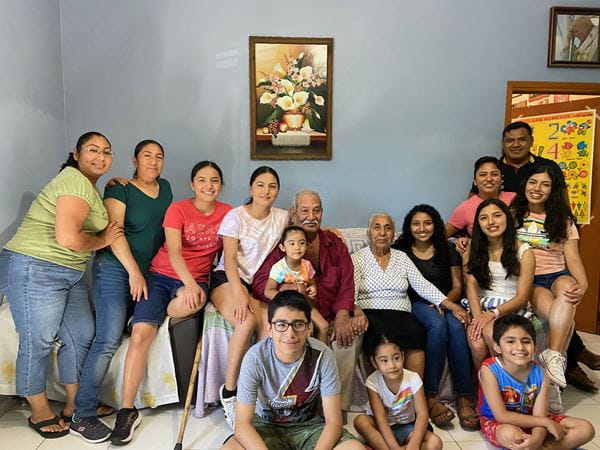 Every Sunday morning was the same. Alicia Martinez-Garcia would join her family in the kitchen for the tamale assembly line. Her family’s tamale recipe was so popular, people from their church would put in orders. It was an all-day process to get them ready before the 7 pm service at Our Lady of Mt. Carmel each week.

“We would make up to 500 tamales—my aunt and uncle’s family would join, too,” Martinez recalled. “My family makes the best tamales—it all has to do with the masa (dough). It’s seasoned well and cooked well. We never make less than 70 at a time.”

Her mom was also known for her Pozole Rojo recipe. Coming from the region north of Mexico City, she made the red-chili version of this traditional stew, while Martinez’s father came from the southern region of Mexico City, where the pozole was verde (green). Since her mom did most of the cooking, Martinez grew up with the red rendition.

While she can’t share the secret family tamale recipe, Martinez got permission to share her mother’s equally tasty pozole. 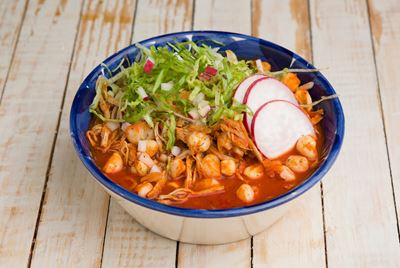 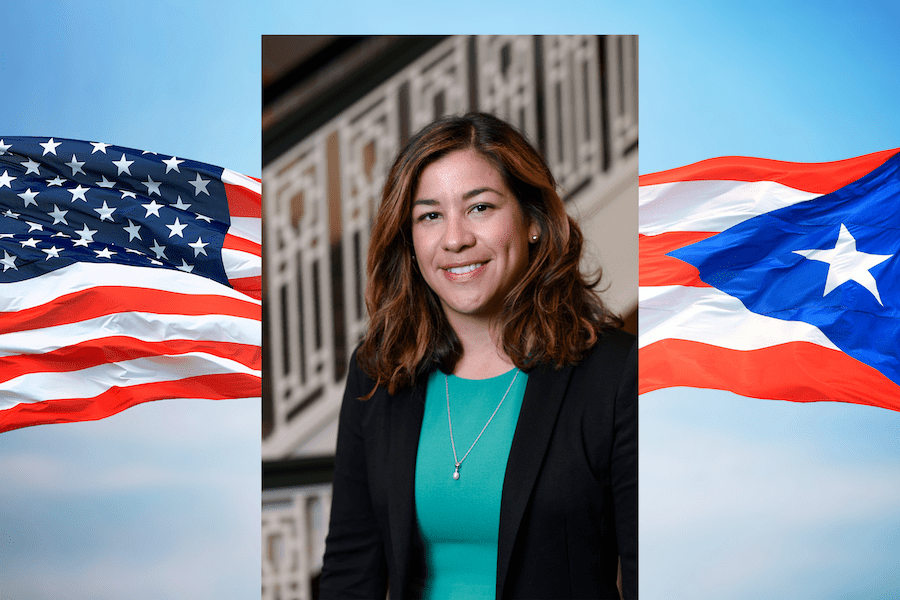 Sylk Sotto, EdD, MPS, MBA, an administrator-practitioner-scholar the Department of Medicine, draws resilience from her Puerto Rican roots as she advocates for equity and inclusion in academic medicine. 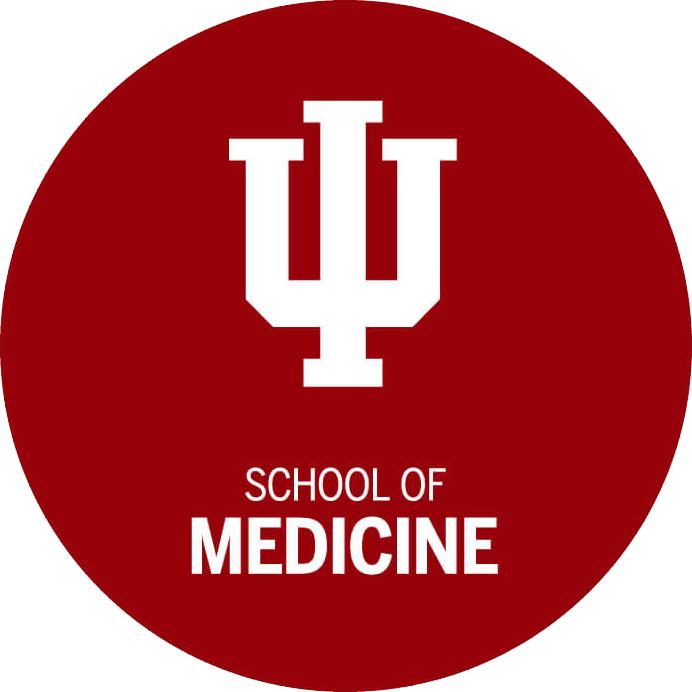