The Graham Laboratory, led by Brett H. Graham, MD, PhD, is studying mitochondrial biology using mice, fruit flies and cell models. The goal is to use models of mitochondrial energy dysfunction (defects in the electron transport chain or TCA cycle) to reveal insights about the normal role of energy metabolism in intracellular and intercellular signaling and to exploit disease models for the development of novel therapeutic strategies.

The Graham laboratory is studying the genetics of metabolic function and disease through the manipulation of genetic model systems, particularly the mouse and the fruit fly, Drosophila melanogaster. Specifically, the lab is interested in the function of the mitochondrion in normal cellular biology and disease. By taking advantage of the strengths of each model system, the lab intends to dissect the pathophysiology of mitochondrial dysfunction to progress towards the ultimate goal of developing novel therapeutic strategies for diseases that exhibit mitochondrial dysfunction. 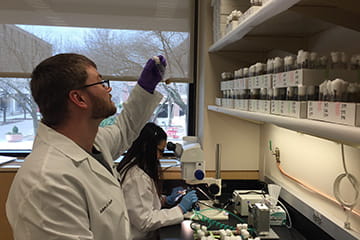 From a cell-based forward genetic screen for mutant mitochondrial phenotypes, a mutant gene trap mouse embryonic stem (ES) cell clone for Sucla2 (which encodes the ADP-specific b subunit of succinyl-CoA synthetase (SCS), a component of the TCA cycle) was identified. In humans, SUCLA2 mutations have been demonstrated to cause mitochondrial encephalomyopathy with mitochondrial DNA (mtDNA) depletion.

Researchers in the Graham Lab have used the Sucla2 mutant ES clone to generate a transgenic line and mutant embryos exhibit mtDNA depletion and mitochondrial dysfunction in brain and muscle. Researchers here are currently using conditional knockout and conditional genetic rescue strategies to bypass late embryonic lethality and to study SCS deficiency in adult animals. The team is also developing and studying gene trap mutants for select components of respiratory chain complexes I, II, and V.

Voltage-Dependent Anion Channels (VDACs or mitochondrial porins) are a family of proteins present in the mitochondrial outer membrane that play a critical role in the regulation of outer membrane permeability. Porin is the predominant VDAC in Drosophila. The Graham Lab has generated and been studying hypomorphic mutants of porin. These mutants exhibit defects in energy metabolism, male fertility, and neuromuscular and synaptic function. The lab team has performed genetic screens for suppressors of mutant porin phenotypes and are working to identify candidate suppressor loci. 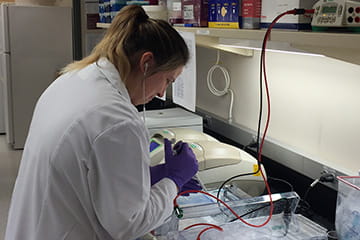 Another project in the lab concerns the development of Drosophila models of mitochondrial disease. The Graham Lab has generated and are characterizing null alleles for genes encoding subunits of various complexes of the mitochondrial electron transport chain. In particular, scientists here have been studying flies mutant for NDUFS3, a structural subunit of mitochondrial complex I.

Mutant animals exhibit complex I deficiency and neurological dysfunction manifested by locomotor defects, increased sensitivity to mechanical stress (“bang sensitivity”), and progressive deterioration of retinal function as measured by electroretinogram (ERG). These animals also exhibit increased oxidative stress and mutant phenotypes are partially ameliorated by supplementation with antioxidants. This lab team is currently performing a pilot drug suppressor screen designed to detect improvements in the ERG. The long-term goal of this project is to use these mutant alleles in both genetic and drug modifier screens to identify suppressors of mutant phenotypes that will provide insight into the pathophysiology of mitochondrial disease and potentially provide novel therapeutic strategies and targets. 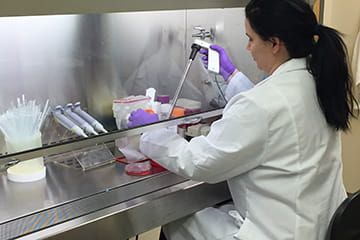 The Graham Lab has begun studying the role of citrate metabolism in neurometabolism. This is based on the recent identification of patients with early infantile epileptic encephalopathy caused by pathogenic variants in the plasma citrate transporter (SLC13A5). The lab team has recently obtained a transgenic mouse line deficient for Slc13a5. The goal of this project is to determine how perturbation of cellular citrate import disrupts metabolic compartmentation between astrocytes and neurons, thereby causing seizures.

A full listing of publications by Brett H. Graham, MD, PhD, is available.